Nice, solid copy, tightly bound. Small bit of wear to crown and tail of spine and two chips from side edge of flexible brown boards at back cover. Measures 8"x11"and shows the name Nancy Mallama at front free endpaper. What makes this one special is the laid-in real photo post card of the 1929 East High football team with most players identifed on reverse side. Also has four photos of servicemen laid-in. A few faculty members signed by their photos. Autograph pages at back show many classmate signatures. View more info

Red boards are clean, but have a mottled appearance. Very little wear and contents clean as a whistle with no names or writing. No toning to pages and very nice art and photo illustrations thoughout. Laid-in is a copy of an Academy publication called The Log Book dated May, 1939. This has 28 pages and is photo illustrated. By the time The Log Book was published the school had moved to Lake Geneva, Wisconsin from the Highland Park, Illinois location. View more info

Very nice, clean book showing almost no wear. Metallic gold boards brightly colored with rose colored design at face. Book has a musical theme which begins with notes at front cover and is carried throughout with note motifs and the inclusion of numerous school songs. Very handsome black and metallic gold-veined endpapers.Measures 8" x10-3/4". There's also a few fun finds in the book -- a 1936 Eureka Bulletin and a leter from the college to a coed with information about her dorm room. View more info 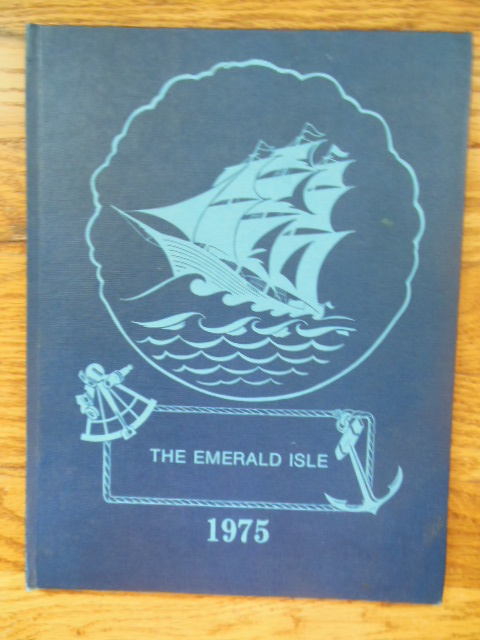 A slim volume, as you might guess, but clean and bright with no faults of note. 60 pages including advetising foom local business. There appears to be no graduates in '75, but the book is for the entire school which consisted of six juniors, six sophomores, five freshmen, six junior high students and seven first to fifth graders. There's pictures of acitivites, staff, alumni as they werre in 1896, 1920, 1947 and 1948 amd also many historical photographs of the island as it was in the 19th century. clearly, there aren't too many yearbooks in any given year. View more info